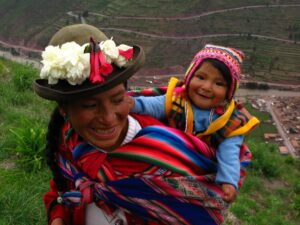 The ancient home of the Aymara is perched twelve-thousand feet above sea level on the Altiplano, a high plateau near Lake Titicaca in the Peruvian Andes. Although life is challenging due to very poor soil and a region susceptible to both drought and flood, the nearly three hundred thousand Southern Aymara have found a way to sustain a vibrant culture. Fulfilling social obligations is very important in these communities, which are usually composed of large family groups. Each person takes part in the husbandry and agricultural tasks that are central to their lifestyle.

To a casual visitor, it may seem the Aymara people have already embraced the Gospel. However, while the name of Jesus and the symbol of the cross are common, these people are just a step away from paganism. Four hundred years ago, they were first introduced to Christianity by Catholic missionaries. In response to these new teachings, the Aymara simply blended Christian terminology and stories with animism, creating a folk-religion that worships both Jesus and natural “spirits.”