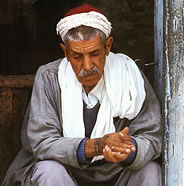 This small, indigenous North African tribe is one of many groups of Berbers (derivative of the Latin Barbar, meaning “barbarian”).  It has remained intact in spite of seventh century Arab invasions and current lack of official recognition.  Belonging to a sect of Islam considered heretical by more orthodox Muslims, the Zaura maintain their own culture and language.

The 36,000 Zuara are one of the most spiritually needy people in the world. Living in Libya, a country in which Christian witness is forbidden, there are no known believers. Since Zuara (a dialect of Nafusi) has never been written, there is no Scripture.

We must not consider this unreached people group to be unreachable! Pray that God will open the door and raise up well-trained linguists. Ask Him to bind the powers of Satan and to soften the Zuara’s hearts so that the light can shine in.