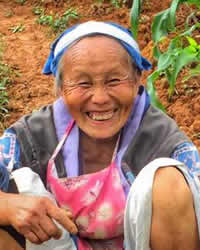 Imagine a dark place where superstition and fear rule peoples’ lives. It is a place where daily activities must be done in a prescribed manner or risk the ire of demons and the spirits of ancestors. There are no Christians, no Scriptures, and no hope. This is reality for the 123,000 Luobohe Miao (a group of the Hmong people cluster) who live in the mountains in southwest China. They keep to themselves in their own remote villages and live by farming.

The Luobohe are ethnoreligious—they are unified by both their ancestry and their animistic religion. Jewry is another example of ethnoreligion, especially in the Old Testament. To be a Jew was to be both a descendant of Abraham and a follower of the law of Moses.

The Luobohe language is tonal with three distinct tones that distinguish words. It is largely unwritten, though a Latin alphabet has been recently proposed. This language desperately needs a translation of the Bible. The Word of God can cross borders and go to places where missionaries cannot go.

Global Recordings Network recorded six Bible stories in Luobohe. You can listen to The Lost Sheep at https://globalrecordings.net/en/progra. Someone was the human instrument that produced this recording, the only glimmer of light for the Luobohe. Will you be another human instrument by praying for them? Pray for someone to take them the the Gospel, for heaven’s forces to bind the evil one, and for the light to shine brightly.