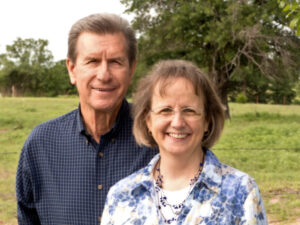 Rex and Mary were born in Michigan and met at Open Bible Baptist Church in Belleville in 1969 during a five-week revival meeting. Mary was saved then, and Rex dedicated his life to serve Christ.

Mary helped Rex finish Bible school at FaithWay Baptist Institute, and after a short time working with youth, they began full-time deputation. They moved to Texas in 1973 and were part of the first class at a new missionary training school called Baptist Bible Translators Institute. They also graduated from Faith Bible Institute. In 1976 they began Spanish language school at the Universad Javeriana in Bogotá, Colombia, and from 1978 until 1999, served in Mexico as Bible translators and church planters. Since then they have helped train new missionaries at BBTI. Rex serves as director and teaches Language Acquisition, Bible Translation, Deputation Principles, and Baptist Church Planting. Mary teaches Phonemics, Literacy, and TEFL (Teaching English as a Foreign Language). Rex and Mary have four children and fifteen grandchildren. 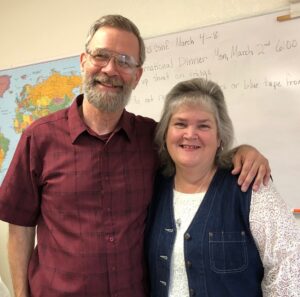 Brian was born in Jackson, Mississippi on January 6, 1957 and Patricia was born in Maryland on October 26, 1960. They were both “bus kids.” Brian was led to Christ by youth director, Jim Chance, of Candlestick Baptist Church. Patricia was saved at a revival meeting, preached by Raymond Hancock.

Brian retired from the United States Navy after over twenty-two years of service. The Alfords have two children and four grandchildren.

The Alfords attended BBTI during 2000 and 2001. Shortly after graduation in 2001, they were on their way to the field of Thailand when Patricia was struck with a brain aneurysm and underwent emergency surgery. Both her home church and the doctors decided that she should not go to the foreign field. The leaders of BBTI asked them to join its staff, and they did. Brian teaches Linguistics, Greek, and World Survey; and Patricia is our office manager. 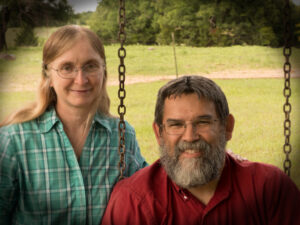 Steve and Margie Schnell hail from Tennessee where they met and were married in 1991. Steve was born in Nebraska, and Margie was born in Pennsylvania. Steve was saved in 1986 while serving in the US Navy, and Margie was saved in a Mennonite community in Pennsylvania. They are 1996 BBTI graduates. They served in Cambodia from 1998 to 2011 where they worked in church planting, literature translation and distribution, and radio ministry. They saw six churches started while in Cambodia, each of which began actively reaching out into new areas. The radio ministry continues today under Cambodian direction.

Steve has served as a trustee for BBTI since 1997. The Schnells joined the staff of BBTI in 2011. He teaches Cultural Anthropology for Missionaries, Chronological Bible Teaching, Field Medicine, and Jungle Camp. He also oversees the work detail program and maintenance and construction.The Schnells work diligently at whatever task is laid upon them. Steve and Margie have six children and two grandchildren.