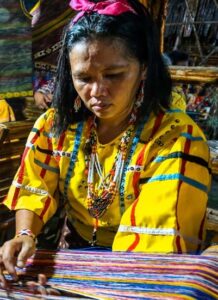 Located in the heart of the second largest island of the Philippines is a tribal people who cling tenaciously to their ancient customs and traditions. The Bagobos are a people steeped in ethnoreligion. They combine spirit worship, ancestral worship, and nature worship into a religion that is strict in ritual and full of fear. They are fiercely territorial, suspicious of outsiders, and very resistant to the efforts to assimilate them into the other cultures and languages around them. They believe to do so is to deny their religion and entire way of life.

The Bagobo are one of the largest groups of indigenous people of southern Mindanao. Historically a warring tribe, the Bagobos raided neighboring villages and offered human sacrifice to their deity, Pamulak Manobo, until the practice was forbidden under Spanish rule. They are largely agricultural, and rice is the staple of their diet. This diet is supplemented with hunting and fishing. The planting, cultivating, and harvesting of rice is deeply tied to religious rituals. Planting coordinates with the movement of the stars, hoping for the good-will of their god of the growing season. During harvest, the leader of their tribe (the Datu) will give an offering to the “spirit of the harvest.”

The Bagobo speak their own distinct dialect. It is an unwritten language with no Scriptures, therefore the
80,000-100,000 Bagobo souls are without God’s message.