Called from the Cobbler’s Bench 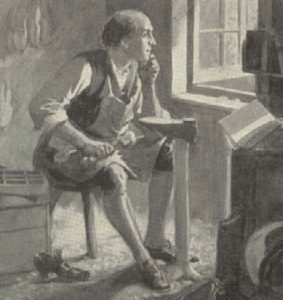 In 1783, above a cobbler’s bench in England, there hung a large hand-made map of the known world. As the young cobbler worked, he prayed for little-known lands full of people who were ignorant of the Gospel. Between shoe-making, school teaching, and itinerant preaching, he found time to teach himself Greek, Hebrew, Latin, Dutch, French, and Italian. In 1789, eager to spread his vision of the need for organized world missions, he went to  pastor a large church in Leicester.

In spite of indifference, resistance, and even public rebuke, he presented his burden tirelessly, finally gaining the attention of the Baptist world in a sermon on world missions of which the keynote was “Expect great things from God. Attempt great things for God.” As a direct result of this sermon the Baptist Missionary Society was formed “for the propagation of the Gospel among the heathen.” Thus William Carey is known as “the father of modern missions.”

Unselfishly, Carey proposed the name of a Christian doctor as the first missionary to be sent by the board. However, when the board determined that he should go with Dr. Thomas, Carey was overjoyed. For forty years Carey labored in India both preaching the Gospel and translating the Bible. God so gifted and enabled him with an incredible talent for languages, that he was involved in translating the Scriptures into forty different languages, eight of which included the entire Old Testament. Although Cary suffered the loss of three children, was widowed twice, often hindered by the government, and frequently suffered financial loss, those around him were strongly aware that his confidence was firmly established in God. In the midst of his difficulties Carey testified, “I have rejoiced that God has given me this great favor ‘to preach among the Gentiles the unsearchable riches of Christ.’ I would not change my station . . . for all the wealth of the world.”

From a cobbler’s bench God chose a man to rekindle the fire of evangelism in the church. God delights in using the humble, the obscure, and the unlikely to fulfill His purposes—all He needs is someone willing to obey.

“The Lord is faithful, Who shall stablish you, and keep you from evil.”
II Thess. 3:3