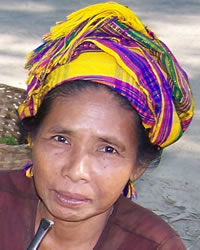 Centuries ago, the most feared pirates in the Bay of Bengal terrorized com-munities in what is now Bangladesh. These pirates were called Maghs. Having left the seas long ago, the Magh are now valley farmers and dislike the term Magh because they do not want to be associated with pirates. They prefer the name Marma, which means “Burmese.” There are 182,000 Marma living in the Chittagong Hills of southeastern Bangladesh. There is no Bible in the Marma language.

Marma villages consist of ten to fifty houses made of bamboo, wild grass, and straw and are built on elevated platforms along the banks of streams. The space underneath the platform is used for keeping livestock or storing wood and handlooms. Rice and boiled vegetables are major food items. Nappi, a paste of dried fish, is a favorite.

The Marma practice Buddhism mixed with animism, believing that all living things have individual souls and through reincarnation will progress to a state of eternal bliss. They also believe in local spirits which reside all around them and must be appeased.

The Marma celebrate a number of yearly Buddhist festivals, one of which is Purnima, Buddha’s birthday. At this time, they make cakes by day and send lanterns into the sky by night. Sangrai, the Marma New Year, boasts a water festival which youths celebrate by splashing water on each other. They also go to monasteries to participate in bathing the Buddha statue.