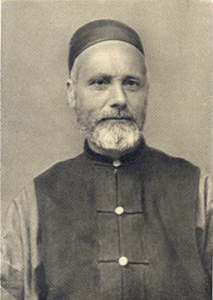 “Finding his contact with civilization was hindering him in his strenuous efforts to master the Mongolian language, he resolved…to persuade some Mongolian to receive him as an inmate of his tent…Gilmour feared nothing, but strode cheerfully over the plain making for the first tent he saw on the horizon.”1

For twenty-one years James Gilmour worked among the Mongols of Northern China. After centuries of Buddhism, they were very contented with their way of life and saw no reason to turn from it. It was therefore ten years before Gilmour saw his first convert. This man was saved at a roadside inn, then after a twenty mile walk, prayed with Gilmour and left him at the crossroads.

Over an eight month period, Gilmour recorded preaching to around 24,000 people, treating 6,000 for illnesses, selling 3,000 Christian books and distributing 4,500 tracts. The literature distribution among this nomadic people covered over 180,000 square miles and was a task too large for any one man. During that eight month period, two people openly professed Christ.

What could drive a man to continue under such unspeakable odds? What could compel him to continue when his followers were turned away by the bad testimonies of other missionaries? What kept him going when his beloved wife lay in the grave and his dear boys were in England? God gave him passion, He gave him purpose, and He gave him the strength to carry on.   God also gave tears to stoic Buddhist lamas when they heard of the death of “our Gilmour.”

Gilmour was able to start three small churches among the Mongols of China and was known among them all for his faithfulness in spreading the gospel. Near the end of his life he said, “Lately I am becoming more and more impressed with the idea that what is wanted in China is not new lightning methods so much as good, honest, quiet, earnest, persistent work in old lines and ways.” This was spoken by the man whom everyone admired for his courage and adventurous life. He was a servant of Christ, that’s all.