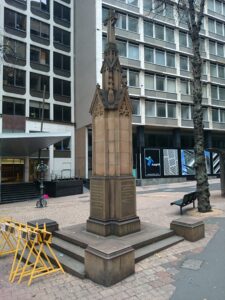 The Richard Johnson Memorial sits on the site of Australia’s first church.

Far across the oceans, he stepped onto the shores of New South Wales. He didn’t know what lay ahead, but he had traveled the grueling eight-month voyage with a burden on his heart for the souls of the unwanted and unloved. At the young age of thirty-three, Richard Johnson had responded to John Newton’s plea and God’s call to be the first missionary to the penal colony of Australia.

Back home in England, Johnson had taken on the responsibility of delivering the Gospel to the outcasts of British society.  He had poured his heart and soul into the work of the ministry, giving himself to preaching the gospel, ministering to the sick, and doing whatever he could do to help those in need. Here in Australia, difficulties met him at every turn as he put his hand to the plough, yet, he remained faithful. The first service was held under a tree on February 3, 1788.  He chose Psalm 116: 12-13 as his scripture text, “What shall I render unto the Lord for all his benefits toward me?  I will take the cup of salvation, and call upon the name of the Lord.”
For the next four to five years, Johnson repeatedly petitioned the governor for a church building, but the petition was denied. He was told that a church was not important enough to warrant the expense. Open air services were all they had until Johnson decided to build a church with his own money. At the meager price of 67 pounds, or 80 US dollars, a building was erected and utilized for the honor of God in 1793. In a seemingly bleak turn of events, the building was burned down in 1798; however, a new governor had been instated between 1793 and 1798. God used the new governor of the penal colony to have a stone church building erected which lasted for the next fifty-eight years. In 1792, a year before Johnson built the church, he wrote a tract addressed to the prisoners in which he expressed his deepest desires. The following excerpt is but a small glimpse into this man’s heart: “I beseech you, brethren, suffer this word of exhortation. Your souls are precious. They are precious to the Lord Jesus Christ.  They are precious in my esteem. O that you were equally sensible of their value.”

After twelve years of service, Johnson was advised to return to England due to severe health problems. Not much is said about what happened to Johnson after his return; one might say he disappeared into the pages of history. One thing we do know is that Johnson was faithful; he was faithful to continue proclaiming the gospel of Christ and faithful to let men know that Jesus was the only way to life eternal in heaven. Records show that at least two hundred souls were saved in the twelve years Johnson spent in New South Wales, and even after he left, Johnson’s ministry continued.

We may become weary in the work God has given us to do. The future may seem bleak and the labor monotonous, but stay steadfast!