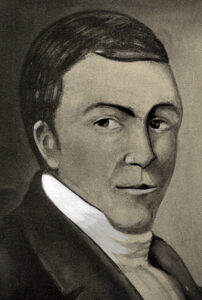 Isaac McCoy was born in Fayette, Pennsylvania, in June 1784. He was the son of a Baptist preacher who, as incredible as it sounds, did not believe in evangelizing. Isaac and his father argued over this, but Isaac was not afraid to stand for the truth. He became a missionary to the Native Americans. Before moving west to the wilderness of Indiana and Illinois, Isaac pastored a church for seven or eight years. His first missionary assignment paid him $500 per year, and he worked with the Weas, Miamis, and Kickapoos in Indiana. He later worked with the Pottawatomie tribe in Michigan.

McCoy used education as a tool to evangelize children. In 1820, he moved to Fort Wayne and opened a school with ten English pupils, six French pupils, eight Indian pupils, and one African pupil. By the end of the year, he had thirty-two Indians living in his own home as members of his family! A year later, he reported that he had forty-two pupils. In 1822, he began a temperance society and made his first trip to Washington D.C. to plead for fair treatment for the Native Americans. Our government was shamefully famous for making and breaking treaties with the Indians They stole their land, relocated them, and viewed them as something less than human. However, Isaac McCoy did not see the Indians this way. He loved a people that others despised.

For many years, McCoy served under federal appointment as a commissioner, surveyor, or teacher among the Native Americans. On a trip to Washington [believed to have been in 1829] to report on his exploration, he visited the Mission Board in Boston. He found them making pleas for missionaries to Burma (Myanmar), Africa, and other countries, but not to the Native Americans. Not everyone shared McCoy’s burden to reach them. Some believed that the Indians would soon die out; therefore, they believed there was no need to evangelize them.

In 1828, McCoy preached the first Baptist sermon ever heard in Chicago. In 1832, he was present in the organization of the first Baptist church in the Oklahoma Territory. He was instrumental in the founding of Grand Rapids, Michigan, and Kansas City, Missouri, where he lived until 1842. At that time, McCoy moved to Louisville, Kentucky and established the Indian Mission Association. On a return trip from Jeffersonville, Indiana, he was exposed to severe weather which resulted in a serious illness that caused his death on June 21, 1846. His dying words were, “Tell the brethren to never let the Indian mission decline.” It was said of him, “The American Indian never had a better friend than Isaac McCoy.”