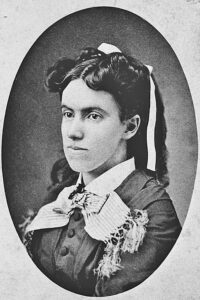 “I would I had a thousand lives that I might give them to…China.” —Lottie Moon

Lottie looked all around her to see that the people whom she loved so dearly were starving to death. She didn’t have much to give them, but what she did have, she gave. But now Lottie’s health was failing; her weight was down to fifty pounds. Fellow laborers felt it was time for her to go home. At the golden age of seventy-two, she boarded a ship headed for the United States and home, but she never made it out of Asia. On Christmas Eve 1912, Lottie Moon died on board the ship in the harbor at Kobe, Japan.

To some, this woman’s dedication was a miracle. If you were to ask her relatives if they thought she would die for Christ, they would have scoffed. Lottie Moon, at the height of four feet three inches, was an unruly child, full of mischief and rebellion. She made it a point to make a mockery of the Gospel and her family’s Baptist faith.

While Lottie was in Virginia attending Albemarle Female Institute, a local Baptist church hosted a revival meeting. Some of Lottie’s friends invited her to go, but she refused. They got together to pray for her by name, and God answered. She went to one of the services to appease those friends but had no idea what was about to occur. That evening, when she could not sleep, Lottie fell to her knees and trusted Christ as her Saviour. Her family noticed an immediate change in her.

Lottie’s sister, who had already served in China, pleaded with Lottie to consider overseas service. This, coupled with God’s leading, took Lottie to China where she would serve Him faithfully until she died forty years later. She became one with the Chinese; she learned their language, dressed as them, ate as them, and poured her very life into them.

Missionary men could not minister to women in China; only women could reach Chinese women. One way in which Lottie evangelized them was by taking little tea cakes or cookies to them. That got the attention of both the women and the children! They called her the Cookie Lady and listened to her. She traveled many miles to witness and proclaim Jesus. As a result of her faithfulness, hundreds of converts came to Christ. She pleaded with the churches in the States to send more laborers and more funds to help with the much-needed ministry in China, but they could not see the burden as Lottie saw it.

Lottie lived, worked, breathed, and died in the service of her Lord. She is an example of what a true servant of the Lord is; one willing to sacrifice everything and leave all to follow Christ. What an example for us to follow! He is worthy of our all!