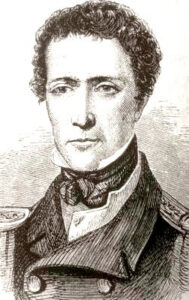 Allen Gardiner paced up and down the street, ashamed to go into the bookshop and ask for a Bible. He had thrown aside his religious upbringing at the young age of fourteen for the rowdy life of a sailor, but now he needed answers. The letter that arrived, telling of his godly mother’s prayer for him before her death, struck his heart with a desire to read the Book that he knew held life’s answers. Secreted with the newly purchased volume in the quiet of a Chinese temple, Allen Gardiner came to faith in Jesus Christ.

With an earnest drive for missionary work, Gardiner went to South Africa in 1834 to win the Zulus to Christ. Although they were notorious for savagery, he brought about peace between the warring tribespeople and opened the door for missions among them. When war broke out between the Dutch settlers and the Zulus, it became impossible to continue the work, and he set his face toward South America.

As he traveled through the continent of South America, seeking to work with the native tribes, he was repeatedly thwarted by governmental regulations, Jesuits, or lack of funding. He also sought to go to New Guinea but was told, “You might as well try to instruct the monkey as the natives of Papua…they’ll never be any different.” Gardiner retorted, “They are men, not animals, and they are included in our Saviour’s command to preach the Gospel to every human being.” Though access was denied him, he did not give up.

He turned to Tierra del Fuego, knowing there was no government or religious system to deny his entry. Two previous attempts to land there had taught him that the Fuegians were violent and thieving. His team, totaling seven men, arrived in December of 1850. The mission began to fail the moment it started. Part of their supplies were left on the ship that landed them, and most of the rest was stolen by the Fuegians who also drove them from the coastline. The men took refuge in a nearby area but were unable to find enough food to survive. One by one, they starved to death. The scheduled supply ship returned twenty days after the last entry in Allen Gardiner’s journal.

Their death created worldwide headlines. Most condemned their “folly and failure” in the venture, but it stirred the heart of the church. A new mission team was sent and, after much turmoil, succeeded in winning many of the Fuegians to Christ.

Twenty years earlier, Charles Darwin had stated that it was “completely useless to send missionaries to savages such as the Fuegians, probably the lowest example of human race.” Darwin later saw for himself the difference the Gospel had made. He was astonished at a people so changed physically, mentally, and spiritually that he not only stated his belief in the regeneration of the people but contributed to the South American Missionary Society during the rest of his life.