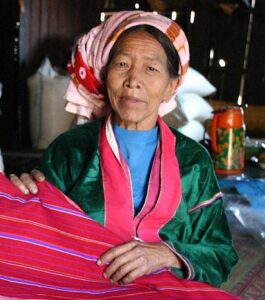 Among the mountains and valleys of the Shan state of Myanmar live the Golden Palaung. Over 200,000 Golden Palaung speak the Shwe dialect of Palaung, which comes from the Mon-Khmer language family.

The Palaung are able to grow a number of crops in their area and they trade for additional foods with their pickled tea (also called laphet). This exclusive novelty is made by fermenting tea leaves over a long period of time and then preparing them to be eaten as a salad.

In addition to their special pickled tea, their traditional houses are quite distinct, and very impressive. They are raised off the ground and can house as many as six families. Some houses are nearly one hundred feet long! In spite of all this room, there is little if any division for each family in the house. Consequently, it is not surprising that single family dwellings are now becoming the norm.

Most Golden Palaung practice Theravada Buddhism. In addition, they continue to practice their traditional animistic religion. A distinction in their animistic belief is that of “nat worship.” Nats are the spirits of inanimate objects. If the people experience hardship, they believe it is because the nats need to be appeased by offering items such as betel or tobacco. Offerings are also given by a shaman at ceremonies during marriages, births, and deaths.