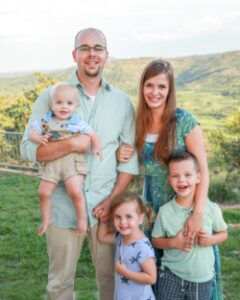 It was August of 2019 when we began living in a village in northern Uganda where we could not understand a single word of our neighbors’ heart language. The language they spoke during their growing up years is the same language they use to ponder deep thoughts, and it was nothing but meaningless noise to our foreign ears. This local, tribal language called Lugbara was one that we were warned would not be an option for a foreigner to grasp. No language school exists [although Lugbara is spoken by 1.7 million people]. Because it is tonal, the most subtle change in one’s tone profoundly alters the expressed meaning.
God called us to these people, therefore we felt it prudent to take whatever steps necessary to understand their culture and communicate in their heart language. For months we would go out every single day, notebook in hand, and use the language acquisition tools we were given at BBTI. Under the shade of a mango or avocado tree while our three-year-old and one-year-old played on a papyrus mat with the African children, we carefully transcribed words and phrases to commit to memory afterwards.

What was their reaction? Absolute fascination! They could not fathom why this family would come from America to learn their language and do life with them. They were overwhelmingly humbled by our desire and anxiously supported our effort. The most frequent question was “Why? Why are you here? Why are you learning our language?” I explained, “Our plan is first, to learn the language, and second, to help people understand the truth of God’s Word.”

There is a mosque in our village which half of our local community attends. The Imam (leader) of the mosque is a man named Agobi. The only language he speaks is Lugbara. I met Agobi during our early months on the field but had very little ability to communicate with him. The Lord gave me a burning desire to share the Gospel with him. Our surface relationship was maintained for some time until two years later when he invited me to his home for tea. My heart was full as I was able to sit in his home and share, in Lugbara, the simple, powerful truths of who Jesus truly is. We pray he will one day turn to Christ.

The preaching of the cross and the hope we have in Christ is well worth any amount of language learning effort if it causes a single lost man to become more tender to such a message. By striving to speak the language of these people, a powerful statement of sincerity resonates in their hearts and minds. Every Lugbara person we encounter is met with an immediate connection and highly effective bridge to the Gospel because of the ability to speak their heart language. I cannot think of a better way to invest our time during these first few years on the field than learning this language.