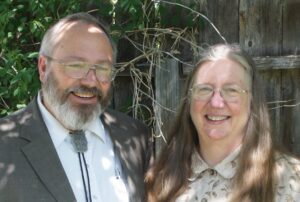 I had thought that missionaries were an extinct species who had all died off in the day of David Livingstone. But shortly after the Lord saved me, I met my first real, live missionary! Then, while serving a tour of service in Korea in the Air Force, I asked people in America for the names of missionaries that might be in my area. Every time I had leave, I took the bus as far as I could and then hiked back into the mountains of Seohae-Dong to help a missionary who operated an orphanage for the Deaf. After separating from the service, I laid a map out before the Lord and asked Him to send me to the Pacific Islands as a missionary. His answer was a resounding “no.”

My wife Mary and I busied ourselves in the work of the Lord. Over the last forty years we have served in many different capacities. We always sought to do what God led us to do as He led us to do it. Each time our ministry and focus changed and we asked the Lord, “What would you have us to do?” it was always preceded with, “May we go to the mission field now?” His answer was always “no.” However, we took young people on short term mission trips. As our son and several students that we had taught over the years surrendered their lives to the mission field, we resigned ourselves to the idea that perhaps the Lord felt a better use for us was to train others and send them off to serve on the foreign field.

After pastoring for a number of years, we found ourselves at the same ministry crossroad. This time, when we asked if we could go to the mission field our hearts began to be convinced that the answer was yes! (At first, we did not admit it to each other for fear the other would think we had lost our minds!) We needed confirmation that this was truly the will of the Lord and not our own desire. So, without saying much to anyone about why we were going, we went to Nicaragua seeking for answers. And God did answer!! He opened door after door and began to lay detail after detail in place for us. Some people have called us crazy for going to the mission field at our age when most people are thinking of retiring. We call it the greatest privilege of our Christian lives.