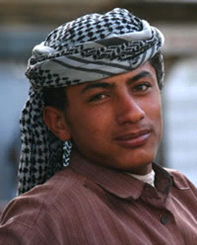 The 7,600,000 (1996) Sanaani reside in the northern mountains and north-eastern deserts of Yemen, a country located on the Arabian Peninsula. This area was once ruled by the Queen of Sheba, and the roots of this proud, tribal people group stem back to pre-Islamic days.  Their language is a distinctive variety of Arabic with some unique features.

Coffee, vegetables, fruit trees and grapes are grown at this high altitude. Also grown is Qat, a narcotic drug and important money crop that is chewed by most men and half the women for its stimulant and euphoric effect.

Ancestry determines the Sanaanis’ place in society, and Islam dominates their lives.

There are no scriptures in Sanaani Arabic and only 0.02 % are professing Christians. Yemen is not open to Christian testimony—nine missionaries were kidnapped in the province of Saada last year.

Will you ask God to reveal the keys He has placed in the Sanaani culture and grant His servants the wisdom and courage to use them in proclaiming Christ?