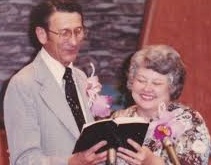 A bomb wrestled through the air, while the loud cracks of the blast set homes ablaze. The people of war-torn Japan sat in the darkness of an uncertain eternity. Soon after, former Navy man Lavern Rodgers and his wife, Evelyn, arrived with the good news of the Gospel.

In 1945, Lavern Rodgers first heard his Macedonian call through the exhortation of General Douglas MacArthur who, quoting Matthew 5:44a: “Love your enemies,” made the appeal for 15,000 missionaries to come to Japan. Lavern Rodgers knew that in order to follow God’s call on his life, he would have to replace his personal hatred for the Japanese with God’s love for them. He wrestled with the Lord. Would he do the unimaginable and go tell His enemies about Christ? Knowing he could never win a fight with God, he surrendered.

To prepare, he attended Bible Baptist Seminary in Fort Worth, Texas, where God spoke to him through a quote from William Carey: “Attempt great things for God. Expect great things from God.” With these words ringing in his ears, he and his wife, Evelyn, took the rocky boat voyage to Japan in September 1950. After thirty-three days, the Rodgers finally arrived in the bombed out city of Yokohama. Even Shizuoka, the city where they began their first work, was 60% destroyed. In the midst of these depressing surroundings, they kept their eyes on Jesus.

The Lord opened up amazing opportunities for church plants to begin. They were able to start churches in nine different cities between 1950 and 1967. Lavern Rodgers said that “Planting churches is like planting trees. They are foundational to a Biblical ministry. These are our trees.” But building a church in post-war Japan was not going to be an easy task. He and his friends had to tear down buildings and reuse the scraps to build their first church in the city of Shizuoka. This was a great lesson for the Japanese people, because it taught them to use what God provides.

Many young Japanese would soon attend the services. A girl named Sachiko Saigo Yasuba described the church as having a warmth and brightness she had never experienced. As a struggling wife, she came looking for pity but instead found a warm greeting from Evelyn Rodgers who took her by the hand and showed her the Romans Road. Sachiko was amazed to learn that she did not know God. This was the reason she had so much trouble and wrong in her life! Overcome with the knowledge of her sin, she wanted to throw herself on the Lord and no one else. With open arms, she received the Lord as her Saviour that day, and all the darkness became light.