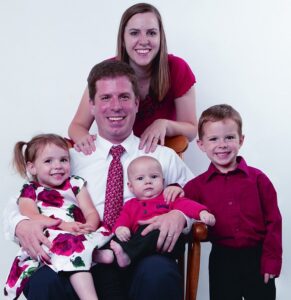 Tayler and Lorin Norris with Eden, Deacon, and Enoch www.missions2moz.org

In the early 1980s, my parents were reached with the Gospel through military missions while they were stationed in Germany as young Airmen. Little did they know that they would someday have five sons, including me, who would be born in Portugal while they were involved in a military mission church. Later in life, I would go on a missions trip to Zambia, Africa, and through that trip, God would burden my heart to give my life to be a missionary to the foreign field.

My call to the mission field was a culmination of my parents keeping missions as an important part of our family life. Growing up, our family attended every service of our church’s missions conferences. My brothers and I were always the first ones at the missionaries’ display tables asking questions. There were many times that my family opened the doors of our home to house missionaries while they were presenting at our church. At a young age, I was taught to not only give my tithes but also to give to missions on a monthly basis. I remember the napkin holder that sat in our dining room, stuffed with hundreds of missionary prayer cards. These were some of the things God used to prepare my heart to surrender to take the Gospel to the lost.

I prayed for two years before God, at the end of our church’s missions conference, burdened my heart for the country of Mozambique. A year later, after talking with my wife and seeking council from our pastor, my wife and I visited Mozambique. While there, God confirmed in our hearts that Mozambique is where He is leading us.

Throughout my life, God has used missions to make His will evident for me. The involvement of others in missions has also influenced me. It is clear that He uses missions to call laborers to reach the lost. Would you pray for laborers, about missions, and what God would have you to do?