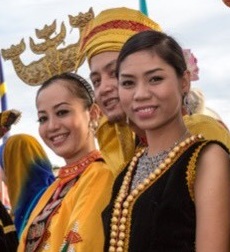 The 750,000-900,000 souls comprising the Bajau or Sama people are dispersed throughout the Malaysian section of Borneo and are thought to have originated in the Philippines. There are various Bajau languages, and they are mutually unintelligible. While some of the Bajau have Bible translations or Gospel resources, at least one of them—the West Coast Bajau people— have no known Gospel resources: no Bible, no New Testament, not even a John and Romans! Although there is now a translation process underway, it could be years before its completion. Meanwhile, more than 250,000 souls remain Bibleless.

The West Coast Bajau (WC Bajau) were once sailing nomads, but have since settled along the northern and western coasts of Borneo, adapted to an agricultural lifestyle, and adopted Islam. Because of language mixing between the vernacular and the national language (Malay), “pure” WC Bajau is increasingly rare. Written WC Bajau existed only informally until the last thirty years when linguists, trying to encourage literacy in both Bajau and Malay, began working on formalizing an orthography. Both of these factors—a transitioning spoken language and a young, if not underdeveloped, written language—only serve to complicate Bible translation work among the WC Bajau.

Please pray for a reliable Bible translation for the WC Bajau as well as the development of literacy and other Bible resources.