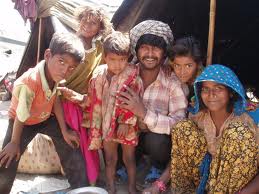 The Agaria is not only a tribe, but also a caste whose occupation is iron smelting. Their name is a reference to their iron ore kilns; historians state that it comes from either the Hindu god of fire (Agni) or their tribal demon who was born in flame (Agyasur). There are numerous  other important deities (both  tribal and Hindu),  including the supreme sun god, their ancestral god, and the iron demon, Lohasur. When there is sickness, a village sorcerer determines which deity is offended and must be appeased.

Iron smelting is a family affair. Both men and women collect the iron ore and make charcoal for the kilns. The women operate the bellows while the men pound the iron ore to shape it. When a new kiln is constructed, even the children help.

Over the last decade, progress has been made in Bible translation for the people groups of India, but groups like the Agaria have even more hope in the future. South
India Baptist Bible College and Seminary is offering their first linguistics and translation classes, beginning on June 20th. Pray for the students, for an ever increasing commitment from the college leadership, and for strength and wisdom for the missionaries involved in helping to establish this course of study.