An Instrument in God’s Hand 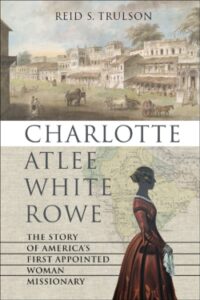 There was no headstone for Charlotte Rowe until her name was uncovered among the missionaries appointed by American Baptist International Ministries during research as it prepared for its 200th anniversary.

Charlotte White Rowe was the first woman missionary to be officially appointed from the United States by any denomination or agency. Charlotte was born in 1782. Her early life was marked by sadness. She was orphaned at age twelve and widowed at twenty-two. She moved to Massachusetts where she was saved and joined First Baptist Church of Merrimac.

In 1813 Charlotte moved to Philadelphia and joined the Sanson Street Baptist Church. There she met and joined Charles and Phoebe Hough who were going to Burma to help Adoniram Judson with printing work. She applied to the Baptist Board of Foreign Missions in the summer of 1814. After much discussion, the majority consented to her approval but then said they did not have the funding to send her. She pledged her own small estate to the work and left for India. The next year, the mission society’s new ruling forbade the appointment of single women missionaries.

After four months at sea, Charlotte and the Houghs landed in Calcutta and traveled to Serampore. It took two months for them to arrange shipping for the printing press and supplies to Burma. During that time, she met missionary Joshua Rowe, a widower with three small boys. They were married and Charlotte stayed in India with her new family while the Howes went on to Burma.

Charlotte’s first task was to learn the local language, Hindi. She was a remarkable linguist and learned so quickly that she soon began establishing schools. It wasn’t hard to get native teachers for the boys. To get teachers for the girls she had to hold classes and train the women first. Her resources were limited so she began writing schoolbooks in Hindi.

After only seven years of marriage, with six children and a busy and thriving ministry, Joshua Rowe died. Charlotte was only financially able to continue for an additional three years. She traveled to London in hope of being appointed by the British Mission society, only to find that they, too, had established a ruling against single women missionaries. She then worked to raise passage back to the United States where she ran a boarding school with the help of her twin daughters until the girls died, one in 1851 and the other in 1852. Charlotte died in 1863 at the age of eighty-two and was buried beside her twin daughters in an unmarked grave.