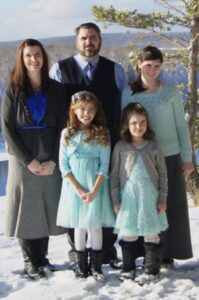 At age thirteen, under conviction of sin, I repented and placed my faith in the Lord Jesus Christ, believing that His blood alone was able to save me. A few years passed and I began to grow spiritually. During the summer before my freshman year of high school, the Lord started to deal with me about going into the ministry. I did not respond to the call at first, because I felt unable, not possessing great oratory abilities. God showed me that is just the point; we are unable, but God is able. The ministry is such that we must rest in the power of God and not our own natural abilities. The Holy Spirit continued to deal with me. I yielded and upon completing high school, went to Bible college.

While attending Midwestern Baptist College, a chapel speaker came and presented the need for missionaries in the arctic regions. He spoke of the many distinct groups of people within the circumpolar region. One of the people groups mentioned was living in northern Siberia, Russia. During his presentation, the Lord broke my heart for the arctic people. I did not want to mistake God’s will, but clarity came as I prayed for direction. The Lord wanted me in the arctic, particularly Siberia. Unbeknown to me, during that same chapel service, the Lord dealt with my future wife about missions in the far north. Upon completion of Bible college, we married, and I returned to the Ohio Valley to work in my home church as my pastor’s assistant before beginning deputation.

During our final stages of deputation, we attended the Baptist Bible Translators Institute (BBTI) where my wife and I spent nine months studying linguistics, culture, and missions. We are so thankful for the training we received. At the time of this writing, we have been on the field for over thirteen years. We have studied language and collaborated with veteran missionaries in both children and village ministries. We are currently beginning in a fledgling work in a northern village with the goal of planting an indigenous church.