From Tijuana to Thailand 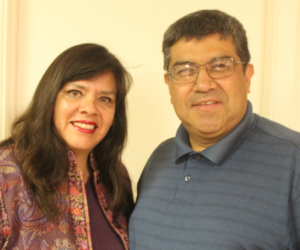 I was born in a town in Baja California, Mexico, into a Roman Catholic family. In 1984, my grandmother gave me a book in Spanish entitled All About Mexico. It told of the various Christian denominations in Mexico. I decided that when I lived in a big city with a Presbyterian Church, I would attend it. Later, when I lived in Puebla, Mexico, I found a phone number of the Presbyterian church in the yellow pages. I called and asked how I could be a member of the church. The person said I needed to accept Jesus Christ. He explained to me the plan of salvation, and I accepted Christ as my Savior.

While studying at the University in Puebla, I met Roger Reeck, an American Bible translator teaching English there.. He had translated the New Testament into an Indian language in Oaxaca, Mexico. I thought I would like to participate in this task, but also saw that it was beyond my ability. (Later at BBTI, I learned that Roger was a friend of Rex Cobb when he worked in Oaxaca, Mexico).

In 2005, my wife and I began to attend an Independent Fundamental Baptist church in Tijuana, Baja California. My pastor gave me the privilege to be in charge of the accommodations and food for missionaries that attended our missionary conferences. Also, I was the treasurer of the missionary fund. I felt that I needed to go and do something in Bible translation, but I lacked the courage.

At our 2019 missions conference, I discussed my interest in Bible translation with our church’s missionary to Chiang Mai, Thailand. He told me of the opportunity to reach Thai people and those in restricted neighboring countries. He told me of the need for Bible translation and suggested I talk with Dr. Bill Patterson, a consultant with the Trinitarian Bible Society. Bill Patterson recommended Baptist Bible Translators Institute. My pastor counseled me to ask the advice of missionary Bruce Martin, who also recommended this institute.

My dear wife, Josefina, is accepting and supportive of my involvement in this ministry and is also preparing at BBTI for missionary work in Thailand.