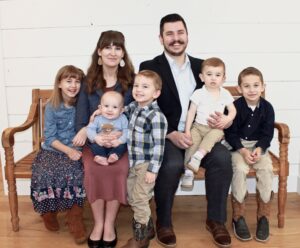 The first missionary family I remember meeting was going to England. I was four or five years old, and they had come to our house for dinner. My parents, desiring to influence their children towards missions, regularly hosted missionaries, and I remember having missionaries to Mexico, France, Philippines, Australia, Russia, and other places coming over to eat. I was eleven when, during our church’s missions conference, I met a missionary who was going to Iceland. I spent the entire week at his table asking him questions, and God planted the seed for Iceland in my heart.

Years later, the Lord began directing me and my wife to move from our place of ministry. Since I had already wanted to be a missionary for twenty years, we immediately started praying for clarity with a focus on missions because where we were serving, a Baptist church was located every couple of blocks. God was bringing the need for Iceland into focus. There is only one missionary and one work in a country the size of Kentucky. As we started to feel God leading in that direction, we prayed for open doors if it was God’s will for us to go there, and for closed doors if it was not his will. We were excited to see God make obvious his will for us to head to Iceland.

It is special to see how God specifically worked to bring me and my wife to this place of being missionaries. I know for a fact that missions conferences, having missionaries in our homes, long distance correspondence with missionaries, and going on missions’ trips all had an impact on us. Our children will grow up in Iceland as “missionary kids,” but that will not automatically make them aware of their responsibility for reaching the world for Christ. It will be the emphasis and focus we put on the task that God has given us that will keep their eyes toward the uttermost. We are excited to raise our children on the mission field, and although we do not know exactly what will happen, we do know it is exactly where God wants us to be.