We Are Going to Heaven 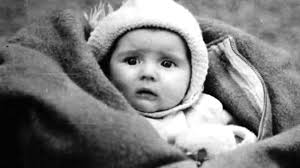 Helen Stam, born in 1934 to
John and Betty Stam

The anticipated knock at the door came suddenly. The rumors were true. The Communists had arrived to arrest them.

John and Betty Stam had met each other in a prayer meeting for China. Their friendship grew into love, but their applications for mission work put them in different corners of the country. Believing God’s work should come before human affection, they committed the matter to the Lord. Through a series of events, Betty ended up in Shanghai, the very place John had been stationed. Within two years, they were engaged, married, and had a newborn baby, beautiful little Helen.

On this particular day, a loud knock came at the door, signifying the Communists’ arrival. Although they had been warned, it was too late for the Stams to flee. The Communists barged into their home, demanded all their money, bound John, and took him to their headquarters. They later came back for Betty and baby Helen.

In a letter which John was allowed to write to China Inland Mission, he said, “We were too late. The Lord bless and guide you. As for us, may God be glorified, whether by life or by death.”

Taken twelve miles on foot to Miashea, the location for their execution, the Stams spent the night in the home of a wealthy man who had fled to safety. John was chained that night, but Betty was given enough freedom to tend to the baby. The next morning, they were led to the execution site. When asked by the postmaster where they were going, John replied, “I don’t know where they are going, but we are going to heaven.” They were both executed by beheading in front of a terrified crowd.

The Christians in the city fled to the mountains and stayed in hiding for two days. A Chinese evangelist, Mr. Lo, ventured back into town, but the people were too fearful to tell him who had been executed. After much effort, he discovered it was the very missionaries he had been working with and that their baby had been left behind.

Mr. Lo searched the house where the Stams had spent that last night. It had been ransacked, but during his search he heard a soft cry. Baby Helen had been left in a sleeping bag by her mother along with a few supplies and ten dollars. That money was used to finance the trip that carried her to safety. Helen was taken to a missionary in another city, and today she lives in the US with her husband and family.