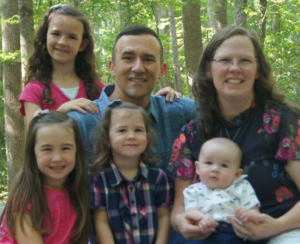 Ten years ago, we featured the Ottosens in the Winter 2009 issue of Lift Up Your Eyes. Cherith Stevens spent ten months in Papua New Guinea, and then, rather unexpectedly, God gave her a husband worth waiting for. She became Mrs. Jason Ottosen, and the two were on their way to PNG to help reach the Kamea tribe in the mountains of Gulf Province. Today, there are six Ottosens ministering there in the village of Komako! The newest missionary is nine-month old Josiah. In March 2012, Jason and Cherith went to PNG with their first daughter, Grace Elisabeth, who joined their team in September 2011. Melody Joy followed in September 2013. Their third daughter, Hannah Faith, arrived the last day of September 2016 and soon began helping to win the hearts of the Kamea people. A lot can happen in ten years!

The Ottosens began adjusting to life in PNG and learning two languages (Melanesian Pidgin and Kamea) in the village of Kotidanga where other BBTI graduates serve. A young man from Komako, a village ten hours north, walked to Kotidanga several times to attend church services and to ask for a missionary for his village. (Ten hours for a Kamea man was a twelve-hour hike for Jason.) Many others have arrived in Kotidanga, begging for church-planting missionaries for their villages. The Ottosens have made Komako their home since 2013 and have established the Komako Baptist Church.

Missionary work in Komako is not all fun and games! A church member named Ems recently died, leaving a wife and five sons. Some members of his clan blamed another clan (also with family members in the church) of killing Ems by witchcraft. Many from the two clans continued to attend services, albeit with the wrong motive. But the Word of God began to work in their hearts. Paimba, Ems’ oldest brother who was leading the conflict, got saved, as did Suwanas, another of Ems’ clan who is the oldest and most respected witchdoctor. Here, as in other places, sickness and death are not seen as the result of natural causes. There is always a hidden spiritual reason. If death is believed to be caused by witchcraft someone must pay! Only the Gospel can break this vicious cycle of ignorance and revenge.

Why would a missionary family endure such isolation and primitive living conditions in a place with no roads or electricity? Why would they pay exorbitant rates to fly in and out of their village? Why would they hike ten hours to the nearest Baptist mission to use wi-fi? Once a church member, upon hearing a missionary lady tell of the living conditions on her mission field, said, “I would not live there for a million dollars!” The missionary responded, “I wouldn’t either; but I will live there for Jesus!”

In the midst of such debauchery, superstition, violence, disease, and enormous spiritual darkness, God is at work. Scripture is being translated. Souls are being saved. Lives are being changed. And the church of Jesus Christ is being built in places where Satan has reigned supreme for centuries. We have received exciting prayer reports from the Ottosens over the last ten years. (A book needs to be written about God’s blessings!) There is much more to do.

The Ottosens desire to see men trained, serving, leading, and spreading the Gospel throughout their mountainous area. Raford Bart is one such man. He is small in stature and the youngest of several brothers, but has been very faithful to church. His faith has been strong despite being tested through discouragement from his brothers and ridicule from his wife. Recently Raford raised his hand to follow the Lord’s leading anywhere. Pray for the Ottosens as they disciple and train men like Raford.