White Harvest in a Dark World 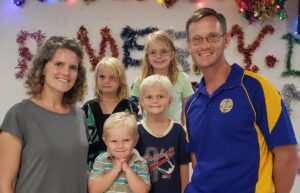 Josh and Rebecca Florence with Abigail, Ruth, Titus, and Josiah

Papua New Guinea is the world’s second largest island and the home of over 850 languages and people groups. In many ways it is a very beautiful country, but with its superstitions, witchcraft, vengeance, violence, and religious confusion, it is also a very spiritually dark place. Fortunately, it is considered a Christian nation with complete religious freedom, and many missionaries are taking advantage of the opportunity to preach the Gospel of Christ to its people. Among these are Joshua and Rebecca Florence, 2012 graduates of Baptist Bible Translators Institute (BBTI). On an eight-week survey trip in 2010, God broke their hearts for this dark place and showed them that Papua New Guinea was their place of service.

The early lives of both Joshua and Rebecca were blessed by godly parents, Baptist churches, Sunday School, Christian education, youth groups, summer camps, and mission trips. Rebecca was saved at age five, and Joshua, who was adopted into a Christian home at age six, made a final and effective profession of faith at age fourteen. At age seventeen, he announced his call to preach and his desire to be involved in fulltime Christian service. He graduated from Pensacola Christian College (PCC) with a Bachelors’ degree in Bible and youth evangelism and then earned a Master’s degree. It was there at PCC that he met Rebecca who became an RN, earning her Bachelors’ degree in nursing.

The Florences arrived at BBTI with baby Abigail. Later, Ruth, Titus, and Josiah were added. They continued raising support on weekends while students and finished deputation after they graduated. They survived a serious automobile accident in Tennessee without injury but totally ruined their car. However, they drove through a giant redwood tree in California with no injury or damage to their car! (Missionaries on deputation have many experiences, some wonderful, some not pleasant at all. Pray for missionaries!)

They arrived in PNG in February 2014 and live in the Western Provence city of Kiunga, a port city on the Fly River. They have established a church there, and in June 2020, they began a new church in Ningerum, located two hours north. They also began the Western Baptist Bible School which currently has ten male students. Ten pastors represent the beginning of ten churches and probably many more in the days to come! Students study tuition-free but are required to work about twenty-five hours each week developing the school campus. Joshua and the men cut the trees in the jungle and mill the lumber.

The Florence family faithfully serves in a place of spiritual darkness. They must be covered daily with the armor of light as good soldiers in spiritual warfare. God is blessing with many souls saved and lives changed. They are bringing the light of the glorious Gospel of Jesus Christ to the people and reaping a field that is white unto harvest. Thank God they are there! Pray for thousands more like them to go to thousands of other places and shine that light on those sitting in darkness and damnation.